Fraser Island was the long awaited Trip. Great Barrier Reef, Whitehaven Beach, and now Maheno Ship Wreck in Fraser Island. It was one of the attractions I was longing to experience.

​About Fraser Island
Fraser island is the largest Sand Island in the world. That means we literally step on the sand soil whenever we’re on the island! Its length is 123 kilometer and 22 kilometers wide. It’s listed among another Australia heritage site such as Uluru and Great Barrier Reef. The island is named after Eliza Frazer, a survivor from a shipwreck that landed on the island. Fraser island is home of about 50 species, it has over 100 lakes (and that makes Fraser island a places with largest number of lakes in Australia after Tazmania). If you want to visit Fraser Island, you can choose between Hervey Bay, Maryborough and Bundaberg. My departure point was Hervey Bay.

When choosing the tour, my option was narrowed down to the two providers below:

And I choose the first merely on price comparison. But both are recognized Travel agent and has a good review. From Hervey Bay, we were picked up to the River Heads for the 8.30am barge crossing to the Wanggoolba Creek landing on Fraser Island. The itinerary of the tour is seen in Google Map below. 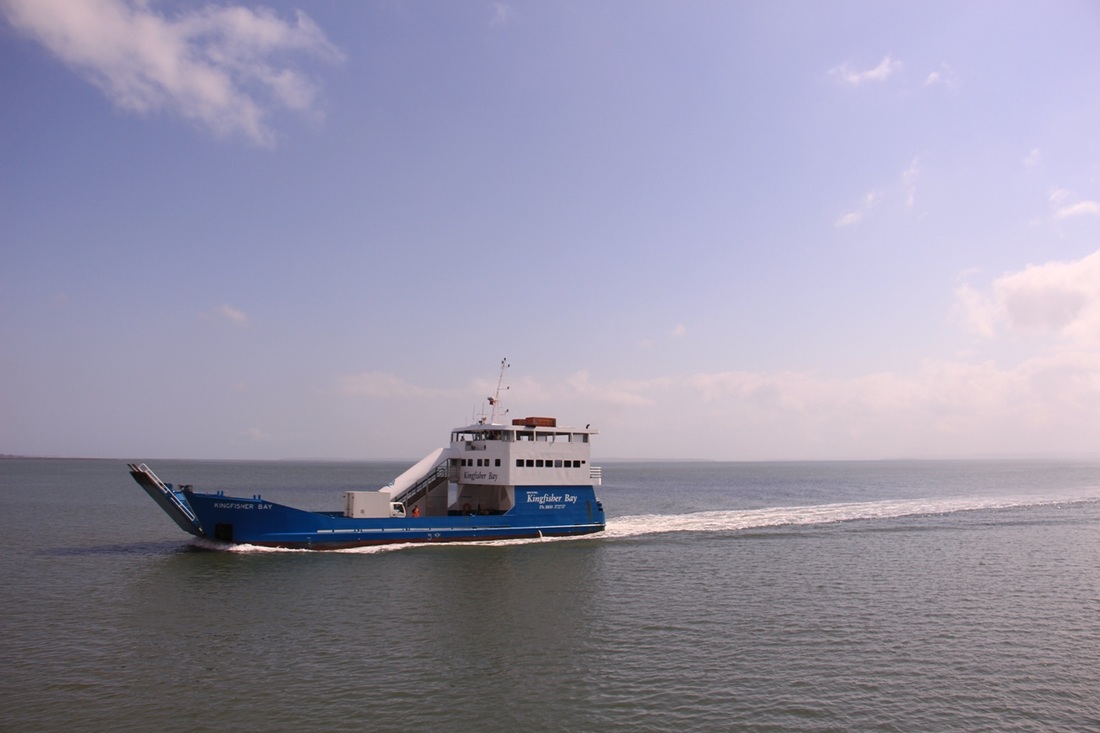 Picture of a barge
​From there, we were taken to the central station, where 4WD Tour Bus/Van (seat about 20 people) picked us up. The van is very unique and specially built up for cruising in such a sandy land. The tire that the van used was custom built for sand cruise. From the central station, we were taken to our first spot (my favorite one: Maheno Ship Wreck *drumroll*)

Maheno Ship wreck was once a SS Maheno that operated in 1900 until 1935 and under the ownership of New Zealand company for commercial services as well as Hospital services during World War I in 1905. on 1935 the ship towline was broken during severe cyclone, the ship got carried away and disappeared. 3 days after the event, the ship was found in the coast of Fraser Island but the ship parts were broken and missing. Since then the ship was left as a wreckage and now becoming tourist attraction.

The journey towards Maheno Ship Wreck was exciting, we passed the the Seventy-five Miles beach along the coast before stopping to the wreck. The ship was just stood there, like a set from “Ghost Ship” movie. It’s beautiful, it’s eery, and it’s picturesque. We stopped by just to take the picture and enjoy the scenery before moving to the next stop.

Our next stop was pinnacle Colored Sand. It attracts tourist because of it’s colour compared to its surrounding. The sand has been formed for hundreds of thousand years and believed to be a mixed between sand and clay and it’s very rich of minerals. 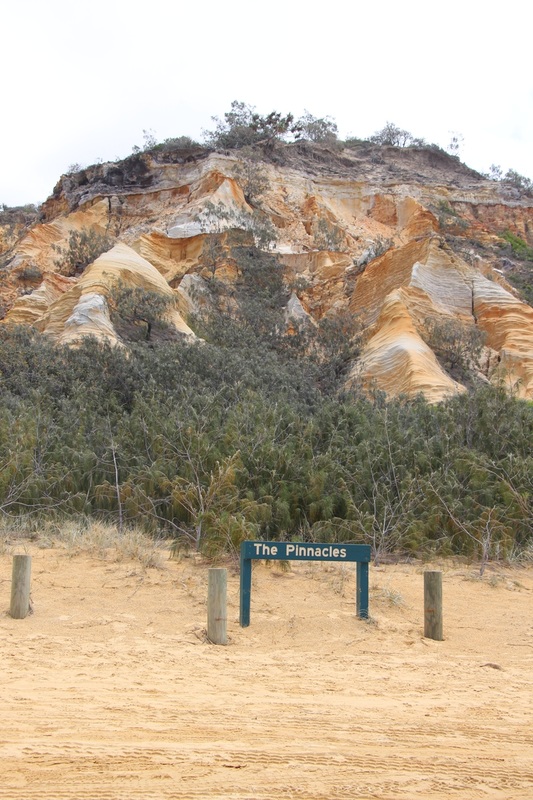 Eli creek flow itself to the sea and the location is very close to the beach. There are many things we could do in here. We played in the outer creek near the beach, and then we follow through the flow of the creek towards main land. The best part in doing this was actually by having yourself seated in a buoy, and let the flow carries you away with the unique tree flanked the river from both side. I just walked circling inside the river (the depth was varies from 0,5 to 1 meter), and it such a nice relaxation in a sunny day. We also explored the nearby “forest” near the creek. 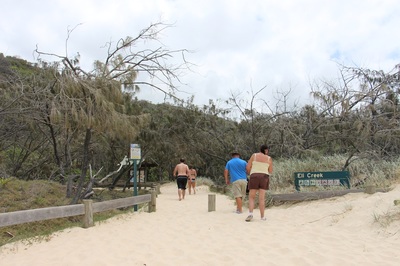 The best part in the whole trip that was memorable, scary and exciting at the same time was the ride itself. I never knew the ride could be so bumpy because of the sandy terrain. Be it on the beach, or inside the wood, the ride was so scary. Several time I literally lifted up to the car ceiling and someone accidently throw away his drinking cup and landed on my lap. Fortunately it was an empty cup, otherwise it would be very messy.
​
Along the way, the tour guide often reminded us of Dingo. Dingo looks like a dog, but it’s also somewhat like a wolf. Sadly, I didn’t encounter any Dingo that day, despite rigorous and continuously warning and explanation about Dingo.

Basically the entire island is considered National Park. Where we were taken to see Fraser Island Fauna. 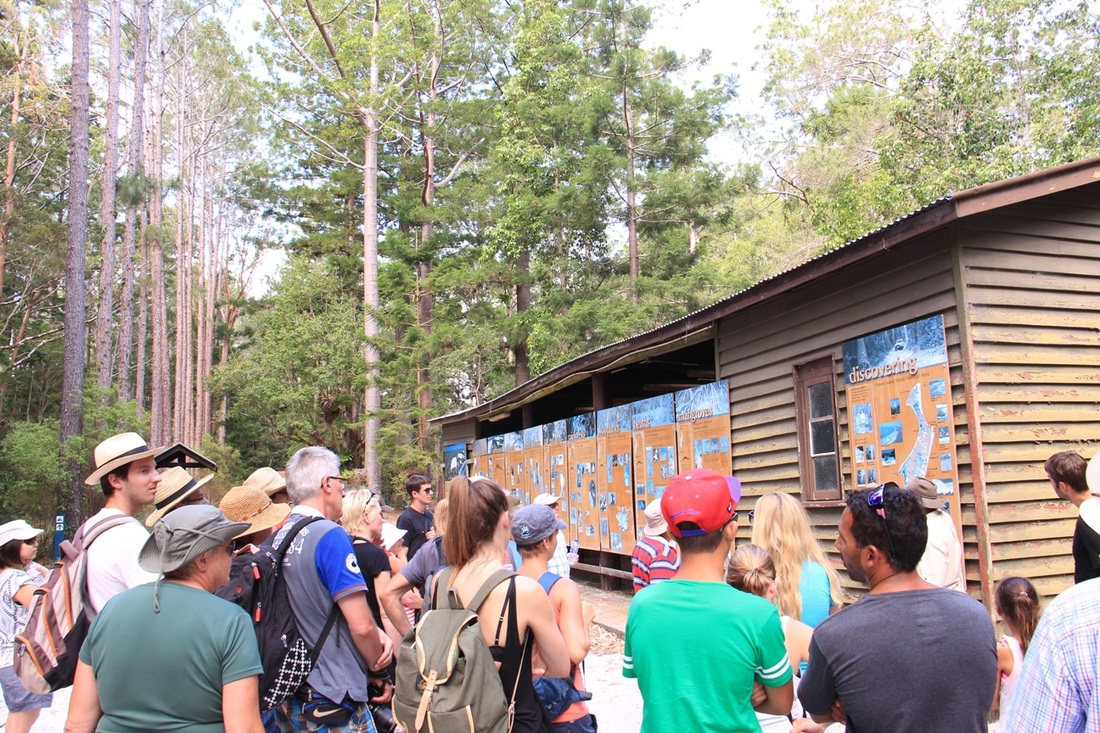 McKenzie Lake was our last stop before returning to Hervey Bay. It such a calm lake with a beautiful View. It’s also unique to have a sand in the lake water (not a sea water).

Asana Kusnadi
I'm Asana Kusnadi from Semarang Indonesia. Some of my friends call me Mei, it is taken from my Chinese Name. I was born in Semarang, capital city of Central Java and lived there until I graduated from University. After graduated i worked in Sumatera island and it's been almost 9 years now i live in Riau Province

Gold Coast from Skypoint Observation Deck  Excitement instantly fulfilled my blood the moment I stepped my feet on GoldCoast. Goldcoast is a city...
Read more
Australia

​Visit to Whitsunday is one part of the Queensland trip I had been waiting for. The white sand of the beach clearly mesmerized me....
Read more
Australia

I like to consider myself as a citizen of the world. I love arts, especially those expressed in building or architecture.

Make this choice and from now on, you will forever be a part of every adventure!